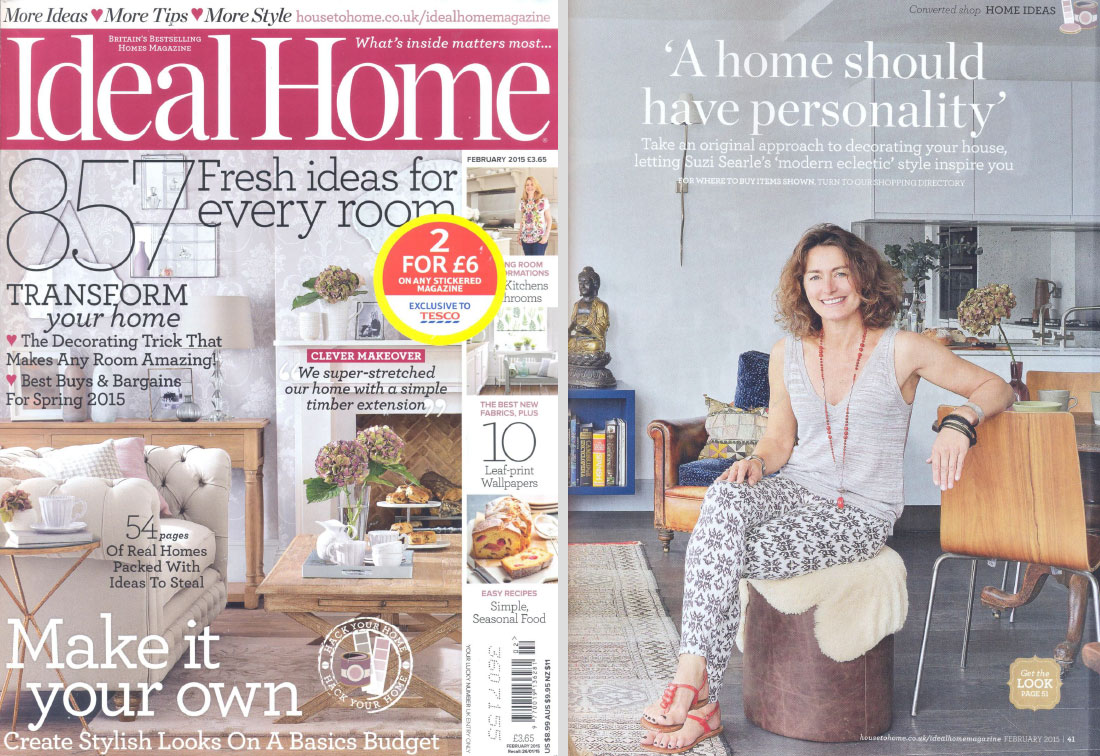 You know when you go out to buy one thing and come back with what seems like the whole store? Suzi Searle can relate to that. Last year she went flat hunting in west London and ended up buying a corner shop. Situated in Brackenbury Village, Hammersmith, the old shop filled the ground floor of a Victorian building. When Suzi discovered it in 2013, it was being used as an office. Prior to putting it on the market, the owner had obtained planning permission to change it from a commercial property to a residential flat, but the space Suzi was shown was far from homely. ‘It had a horrible facade, two pokey toilet cubicles, a tiny kitchenette and a windowless room that had been used for filing’, she says.

Yet Suzi had been looking for somewhere quirky and interesting, and she could see that this property was packed with character. It was also affordable. ‘I needed somewhere that allowed the sums to add up, so I could afford to turn it into a space I’d love living in,’ she says. Buying this flat meant that she had money left over to tick off all the homeware items on her dream shopping list.

Suzi is an interior designer, so she has a lot of experience in working out what layout and decorating scheme will make the best use of a property’s features. ‘I knew once I’d walked round the flat a couple of times what I wanted to do with it’, she says. ‘In order to make the most of the angles and dimensions of the corner plot, my goal was to create a sense of flow between the living, dining and kitchen areas at the front of the flat. I chose wooden flooring for the whole space, so there’s a seamless transition between the zones’.

Suzi planned a new layout to make inventive use of the existing space and let in as much light as possible. The narrow corridors and small, dark rooms at the centre and rear of the property were rearranged to make way for a main bedroom with an en suite, a guest room (which Suzi uses as a home office) and a shower room. Major structural work had to be carried out, with supporting steelwork installed as walls were removed, and the outdoor space at the rear was paved to turn it into a smart courtyard.

‘I bought the flat in September 2013 and the builders started work in December. I lived in what seemed like a bomb site for four months, sleeping on a mattress in the loft space’. Suzi was required to keep the shop’s frontage, but was able to replace the existing glazing with new sash windows, and used frosted film on the lower half to provide some privacy. She had to obtain planning consent to install glazed doors in the main bedroom opening out to the rear courtyard. She also needed permission to move an exterior fan for the heat-exchange pumps that warm and cool the property from its original position in the courtyard to a new spot on the roof.

‘The builders started at the front of the property, so I used a temporary kitchen at the back with a two-ring hob, sink and washing machine. Fortunately, there was a tiny shower room already installed. There came a point, though, when I had to move into what is now my study, when the new kitchen was only half finished, so the builders could finish the back of the flat. That was pretty rough!’

The main bedroom, one of the last rooms to be completed, is packed with clever design ideas, such as a stud wall that divides the en-suite shower room from the main area. ‘I opted for a wall that isn’t full height, so I could retain the feeling of space,’ In the shower room, she had the floor raised and had tall cupboards built to lower the ceiling height. ‘It meant I could install pipes below and a fan above. I use the cupboards to store camping stuff that I don’t have to access very often,’

The work was completed in May 2014, with only one hitch along the way, ‘I was going to put the boiler in a cupboard, but safety regulations meant it had to be relocated to a shed in the courtyard. It actually worked out better, as now I have space inside the flat for a coat cupboard. Challenges can sometimes lead to better solutions, as they force you to rethink your ideas.’

Although Suzi comes up with decorating schemes for clients every day, she found furnishing her own home quite a challenge. ‘Structurally, I had a vision of what I wanted, but when it came to deciding on fabrics, tiles and flooring, it was more difficult. My work means that I’m aware of all the possibilities out there, so it took me a while to decide on my final scheme. Eventually I chose shades of grey as a base colour to complement my existing wooden and leather furniture, then used my favourite accessories and artwork to add bold shades of cerise, orange and blue.’

Suzi has combined rustic surfaces with sleek, luxe textures – a bench made out of skis, for example, sits alongside a marble work surface in the kitchen. The finished effect is a mix of humour and glamour. ‘I didn’t want an anonymous hotel look with everything laid out in straight lines. I believe a home should reflect the person living in it. I’ve travelled a lot, so my flat is filled with treasures I’ve brought home with me.

‘Every piece has its place – I don’t do clutter – but the layout can be moved around when I need it to be. It’s a great space for parties – I had 14 people here for dinner recently and it was such a success, a friend suggested that I open a pop-up restaurant. I’m not sure I’m ready for that, even though this was once a shop. I’m happy it’s become a home.’